Abdominoplasty, what you need to know
An experienced plastic surgeon’s viewpoint by
Dwight V. Galloway MD 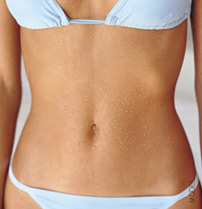 Abdominoplasty, popularly known as tummy tuck, has become
one of our most commonly requested and preformed surgeries. It is
the central feature in the “mommy make overs” which helps correct
the most visible damage to your body associated with child bearing.
This means that a huge percentage of the female population are
candidates, something that has always been a problem, but only in
the last 30 years has become well known.
The 2 major problems that need correcting are: (1) the stretched
and excess skin and fat on the abdomen, and (2) the stretched
muscle and midline tissue that give a lower abdominal bulge as
well as low back pain. A mini abdominoplasty does not move the
belly button and in plastic surgeons thinking, is what is really “a
tummy tuck”. The skin above the umbilicus must be fairly smooth
and a less severe overall problem apparent for this to be the best
solution. It takes only about an hour to perform and can be done as
an outpatient. My estimate is that about 10 to 15 percent of women
would need only the mini, though in the past I did a much greater
percentage than that. The part of the stretched midline tissue,
actually called a “rectus diastasis” that is causing the low back pain
can be repaired through this much more limited operation.

The full abdominoplasty removes all the skin and fat from the top
of the pubis to just above the umbilicus and goes from mid lateral to
mid lateral on each side. For weight loss cases this incision goes well
around the back and in extensive cases a “total body lift” goes all the
way around, like a belt. The upper skin and fat from the umbilicus to
the breast bone and ribs is stretched and flattened up to allow this
tissue to stretch down to the pubis. You generally walk bent over for
about 3 weeks. We also repair the ”rectus diastasis” and cure your
low back pain and allow you to do sit ups again. Liposuction is
usually done on the flanks to help narrow the waistline but is
probably dangerous to do in the upper abdomen as the blood supply
to the lower midline skin and fat comes through that area. (It is safe
to do liposuction for a mini abdominoplasty.) Of major significance on
this operation is the danger of nicotine, usually from smoking, either
just before or after the surgery and even a history of smoking years

before can increase the incidence of skin death and a huge open
wound for 2 to 3 months. If you continue to smoke or are around
smoke from someone else the skin can die. The full abdominoplasty
is by far the most common operation I do today that is so severely
affected by any source of nicotine.
The initial abdominoplasties were usually done for obesity and/or
weight loss with the abdominal skin hanging down on the thigh. This
is still done today and some obesity surgeons do their own cases,
with my blessing since these are very big cases with low insurance
payments. The insurance companies will not cover the routine
abdominoplasties as they call it “cosmetic” and completely deny the
association with the low back pain relief that routinely happens when
the muscles separation is repaired.
Drains and suction catheters after surgery are routinely used by
many plastic surgeons. Only about a third of us do not. I have not
used them in over 40 years and have used what are now known as
“quilting stitches” or “tension stitches” during that time, 20 years
before they had a name. It is a well published and l know as fact that
seromas and hematomas are essentially eliminated by this method,
though they are very common i.e. 30%, with the drains system. It
takes some extra time and work to place the sutures but we have
become very efficient in their placement and can do a complete full
abdominoplasty with rectus diastasis repair in about 2 hours. The
drains are usually the patient’s major complaint after operation.
The position of the resultant scars has changed over the past 30
years. Initially in the 1950s the Bikini bathing suit was very low but
went across the hips and we tried to place the scar where it could be
covered by the suit. Then in the early 1980s the one piece bathing
suit and exercise and running garment left the hips exposed and
these scars stuck out and were unacceptable and we placed our
incisions much higher and more confined to the abdomen. Now we
are back to the low suits with very narrow bands, so we are back to
1970, but placing the central incision thru the pubis. These scars are
usually not thin hairlines and require coverage by clothes, or possibly
a tattoo. The lower central skin is numb after the operation and
usually the nerves grow back and sensation returns over a one-year
period. All the sutures are buried and dissolvable except some in the
umbilicus which are placed so there are no suture marks on the skin
but are all in the umbilicus itself. I try to make the umbilicus small and

vertical, as it was before the children stretched you out. Every one
need a belly button to feel human but it should not be obvious or ugly

Full abdominoplasties can be done on an outpatient basis to
save money or even in a well-equipped office based surgery or
surgicenter. I have done them in all those places in the past. However
an overnight stay in the hospital offers so much more comfort, safety,
and convenience that I only do it that way now. This is a big operation
and under general anesthesia with an indwelling urinary catheter
and an intravenous fluid replacement, things that are placed by the
anesthesiologist while you are sedated or asleep and offer significant
advantages to being continued overnight rather than you being at
your home with your family. There are so many advantages to the
overnight stay that I feel that is the way to go. I have asked numerous
patients if they could have gone home the day of surgery and nearly
all have said no. I include the cost of the overnight stay in my cost
quote.